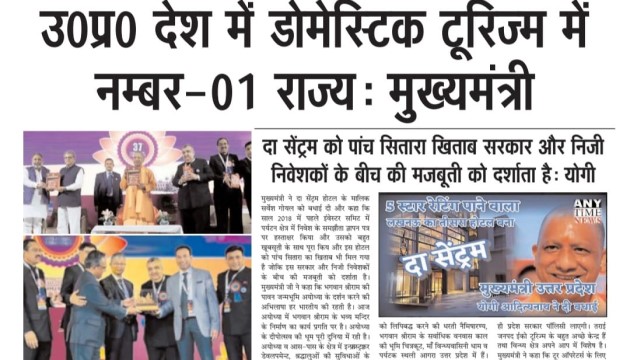 5-Star Title to The Centrum

Uttar Pradesh is the number-1 state in domestic tourism in the country: Chief Minister:-

5-Star Title to The Centrum:-

The 5-star title to The Centrum shows the strength between govt and private investors: Yogi. The Centrum became the third hotel in Lucknow to get a 5-star rating – Chief Minister Yogi Adityanath congratulated it. Uttar Pradesh has become the number-01 state in domestic tourism in the country. There are endless possibilities for spiritual tourism in the state. The oldest city in the world, Kashi is in Uttar Pradesh. Tourists and devotees coming to Kashi experience joy by associating themselves with the energy of ‘Har Har Mahadev’. On December 13, 2021, the Prime Minister inaugurated Shri Kashi Vishwanath Dham. Earlier, 01 crore tourists/devotees used to come to Kashi throughout the year, but this year 01 crore tourists/devotees came to Varanasi only in the month of Sawan. Uttar Pradesh Chief Minister Yogi Adityanath said these things while addressing the 37th annual convention of the Indian Tour Operators Association (IATO) at The Centrum Hotel Shaheed Path. Welcoming all telecom operators in Uttar Pradesh, the Chief Minister said that there is immense potential for tourism and investment in the state. The state government will cooperate fully with the tour operators who make meaningful efforts and work with UP Tourism. He said that tour operators should inform people about the heritage of the country and Uttar Pradesh. Give your contribution to increasing the GDP of the country and the state by inviting tourists from the country and abroad to Uttar Pradesh. Tour operators and other organizations should work to connect the tourism circuits being developed in the state with help services, the state government will provide all kinds of cooperation. There are endless possibilities in every sector of the state.

The Chief Minister congratulated Mr. Sarvesh Goel, the owner of The Centrum Hotel, and said that in the first Investor Summit in the year 2018, signed the MoU for investment in the tourism sector and completed it very beautifully and this hotel was also given the title of five stars. Got it which shows the strength between this government and private investors. The Chief Minister said that every Indian has the desire to visit Ayodhya, the holy birthplace of Lord Shri Ram, and today the work of construction of a grand temple of Lord Shri Ram is in progress in Ayodhya. The festival of Deepotsav of Ayodhya has been celebrated all over the world. In Ayodhya and surrounding areas, development works worth about Rs 30,000 crore are being carried out by the state government for infrastructure development and facilities for the devotees. After the completion of these works, Ayodhya will be in front of all of you as the most beautiful city in the world and after the year 2024, the number of tourists coming to Ayodhya will be 10 times. The Chief Minister said that all the tourists and devotees from the country and abroad visiting Mathura and Vrindavan associate themselves with ‘Radhe-Radhe’. Everyone is seen getting involved in the organization of Shri Krishna Janmashtami Rangotsav. In the last 05 years, extensive changes have taken place in Mathura, Vrindavan Barsana, Gokul, Baldev, and Nandgaon. Spiritual development, as well as physical development and infrastructure facilities, have increased in all the pilgrimage sites of the Braj region. About 30 thousand crore rupees are being spent by the central and state government for the development of these areas. The world’s largest cultural event takes place in Prayagraj, the confluence of Mother Ganga and Yamuna. Prayagraj Kumbh 2019 is known for security, orderliness, and cleanliness. 24 crore devotees came to this event. The Chief Minister said that Uttar Pradesh is the land to practically implement the Prime Minister’s vision on the ground. Emphasis is being laid on the development, renovation, and beautification of tourist places by marking 12 tourist circuits in the state. 06 places associated with Lord Buddha – Sarnath, Kushinagar, Kapilvastu, Shravasti, Kaushambi, and Sankisa are in Uttar Pradesh. The international airport has started in Kushinagar. An airport is being built in Shravasti. Vedic Culture of India

Naimisharanya, the land of scripting, Chitrakoot, the land of the maximum exile period of Lord Shriram, Maa Vindhyavasini Dham, and tourist place Agra is in Uttar Pradesh. There are immense possibilities for eco-tourism in the Terai belt of the state. The Center and the State Government are working together for the overall development of the state’s tourist places. The Chief Minister said that considering the immense possibilities of tourism in the state, the service sector is an important sector, in which a comprehensive change can be brought in the lives of the people through investment and employment. Various works of instructor development are being done in the state. There are 06 expressways functional in the state. Work on the 07 Expressway is in progress. The inter-state connectivity of the state was at 54 places, all of which are connected by four lanes. Uttar Pradesh has the best rail network in the country. The Chief Minister said that the air connectivity of Uttar Pradesh is better. 09 airports are functional in the state, out of which 03 are international airports, Ayodhya and Jewar international airports are under construction, and will be functional soon. Along with this, the work of construction of the airport is also in progress in Chitrakoot, Sonbhadra, Azamgarh Aligarh, and Moradabad. In this way, 10 new airports are being built in the state, out of which MoUs have been signed with the Airport Authority of India for 05 airports. Work is in progress on the remaining 05 airports. 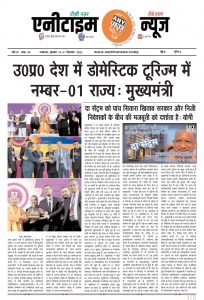