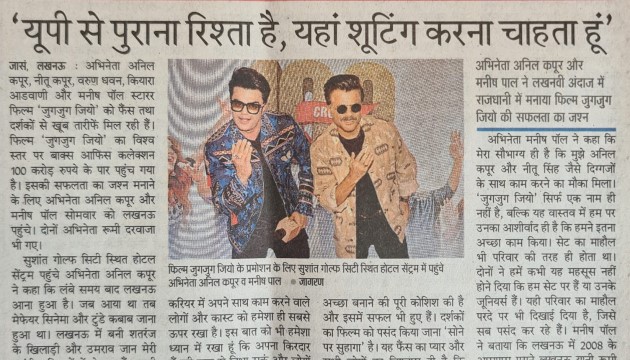 ‘I have an old relationship with UP, want to shoot here’:-

Actor Anil Kapoor, who reached Hotel The Centrum in Sushant Golf City, said that he has come to Lucknow after a long time. When I came, I had to go to Mayfair Cinema and Tunde Kebab. Chess Ke Khiladi and Umrao Jaan made in Lucknow are one of my favorite movies. I have an old relationship with the rest of UP but have never been able to shoot here. Would love to shoot here. Anil Kapoor said, in my career, I have always kept the people and cast I work with on the top of the screen. I have always kept this thing in mind that I can play my character completely and I can reach my point of view to the people. The first question that arises is whether the film is good or not? We have tried our best to answer it as well as make it good in this film and have succeeded in it. The audience’s liking for the film is ‘Sone Par Suhaga’. It is the love of the fans and the belief of all the people that we have been able to live up to it. Of course, it is our job to make a good film, but making it successful is in the hands of the public.

Actor Manish Paul said that I am fortunate to have got a chance to work with stalwarts like Anil Kapoor and Neetu Singh. “Jug Jug Jiyo” is not just a name, but it is actually his blessing on us that we did such a great job. The atmosphere of the set was also family-like. Both never let us feel that we Whether on the sets or their juniors, the same family atmosphere has also appeared on screen, which is being liked by all. Manish Paul told that around 2008 Lucknow was shot in old Lucknow ie Rumi Gate, near Imambara. I don’t want to be in any comfort zone. I want to do different types of roles.

Actors Anil Kapoor and Manish Paul arrive at Hotel The Centrum in Sushant Golf City for the promotion of the film Jugjug Jiyo.

Actors Anil Kapoor and Manish Paul celebrated the success of the film Jugjug Jiyo in a Lucknowi style in the capital.