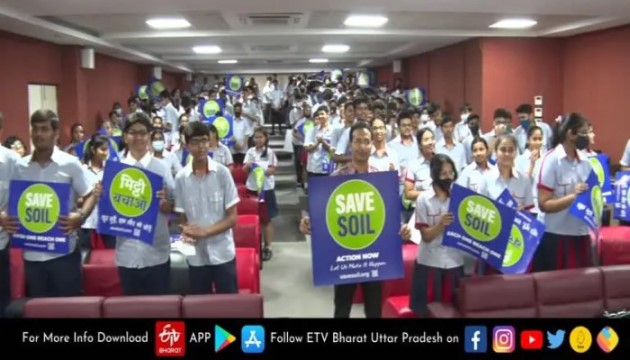 Campaign to Save Soil

Sadhguru, who is reaching Lucknow after traveling 30 thousand kilometers, sent this message to the children:-

Spiritual guru and environmentalist Sadhguru is coming to Lucknow after traveling 30,000 KM. He is running a campaign to Save Soil (save the earth). 64-year-old Sadhguru is on a 27-nation tour. He will cover a distance of 30 thousand kilometers in a bike journey of 100 days under his ‘Journey to Save Soil’ campaign. In this episode, he is also coming to Lucknow on the 7th of June to connect the children of Lucknow and Uttar Pradesh with this campaign.

Before the arrival of Sadhguru, a campaign has been started to take his SAVE SOIL campaign to the children. A special program was organized at GD Goenka Public School on Tuesday. Here Geetika Bharti associated with Isha Foundation interacted with the children. Informed them about the SAVE SOIL campaign. Sadhguru’s message was conveyed to the children. Also, appealed to join this great campaign. School chairman Mr. Sarvesh Goel told that his school stands with this campaign. By connecting every child with it, we will support this campaign to save the earth. 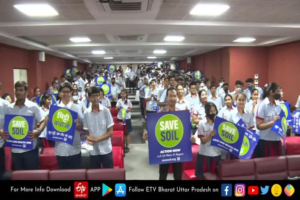 This is SAVE SOIL Campaign:

SAVE SOIL Campaign is a global movement started by Sadhguru. In this, he is motivating the whole world to face the crisis of soil in the coming times and make a policy from now to avoid it. Under this campaign, 64-year-old Sadhguru has embarked on a campaign called ‘Journey to Save Soil’. He will pass through 27 countries in the UK, Europe, and the Middle East till India. He will end its campaign in India’s Cauvery basin on the occasion of International Yoga Day on June 21. During this, he will meet world leaders, media, and experts and will emphasize taking necessary action to save the soil.

Children can join like this: During the program organized at GD Goenka Public School, representatives of the Isha Foundation appealed to the children to join this campaign in large numbers. He has asked the children to write a letter to the Prime Minister requesting him to make a policy for the conservation of soil. Geetika Bharti said that a crisis is going to arise not only in India but in the whole world regarding soil. Due to the lack of organic matter, the soil turns into sand. If this situation continues, in the coming 20 years, up to 40 percent less food will be produced for 9.30 billion people. It is affecting from water flow to biodiversity. Thousands of animal species are becoming extinct. If the world’s soils are not regenerated, 850 billion tons of carbon dioxide could be released into the atmosphere, contributing to climate change. This is more than all of humanity’s emissions in the past 30 years combined. He has given a message to the children to join this campaign.