To spread the message of fitness mantra and healthy lifestyle, Uttar Pradesh Tourism, in Association with urban Lifestyle club The Centrum, is organising Lucknow Run, a half marathon on Sunday.

Addressing the media on Thursday, UP tourism minister Neelkanth Tiwari said the objective of conducting ‘Lucknow Run’ was also to promote tourism.

“Whenever an event like this is held in the city, people start coming days in advance and in such an event there is always an influx of 5000 to 10000 people who come to a new city and roam around as a tourist. Somewhere such activities promote tourism,” he said.

“In future, we will organise the ‘Lucknow Run’ on the lines of the Lucknow Festival, in which thousands of people from far and wide participate, and as the Lucknow Run Half Marathon gets more famous, it will also become grander. Our aim is that every year the ‘Lucknow Run’ touches new heights and the number of participants increases,” said Sarvesh Goel chairman of GD Goenka Public School Lucknow, the man behind the run.

“The entire when will be carried out in the lush green and clean environment of Sushant Golf City, where participants will find good, clean, and wide roads to run, with no obstacles at all. The experience of running in the midst of mild fog and cold in the morning with greenery spread all around is an altogether different experience,” said Goel. 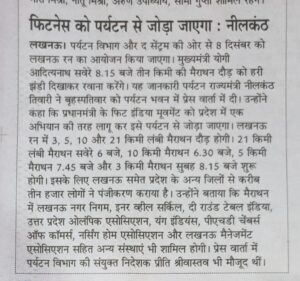 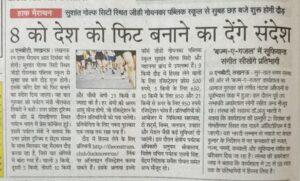