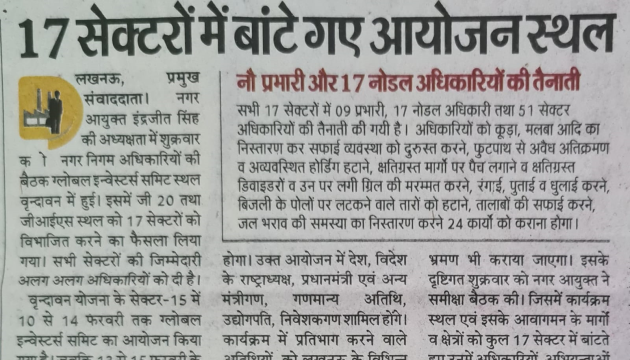 The G-20 conference venue will be divided into 17 sectors, with nine in-charges, and seventeen nodal officers appointed. A review meeting was held in the Municipal Corporation on Friday under the chairmanship of Municipal Commissioner Indrajit Singh regarding the G-20 conference, in which nodal officers have been appointed for each sector, dividing the program venue and its routes and areas into 17 sectors. On behalf of the state government, the Uttar Pradesh Global Investors Summit will be held from February 10 to 14 in Sector-15 of Vrindavan Yojana, and the G-20 Summit from February 13 to 15 at Hotel The Centrum, Shaheedpath. In the review meeting, officers, engineers, and employees have been deployed in them for works related to the Municipal Corporation, while dividing the program venue and its traffic routes into a total of 17 sectors. A total of nine in-charges, 17 nodal officers, and 51 sector officers have been appointed in the above 17 sectors. The appointed officers have been asked to improve the cleanliness system by disposing of garbage etc., to remove encroachments from footpaths and hoardings from the roads, and fix patches on damaged roads and repair dividers. Along with this, 24 works will have to be done including dyeing, painting and washing, removal of wires hanging on electric poles, cleaning of ponds, and solving the problem of water logging. 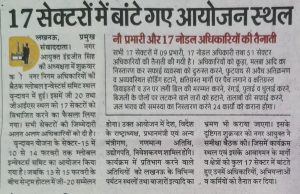 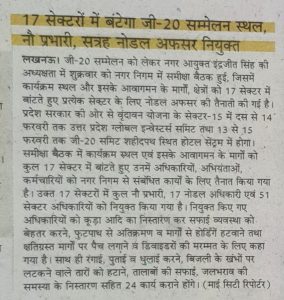