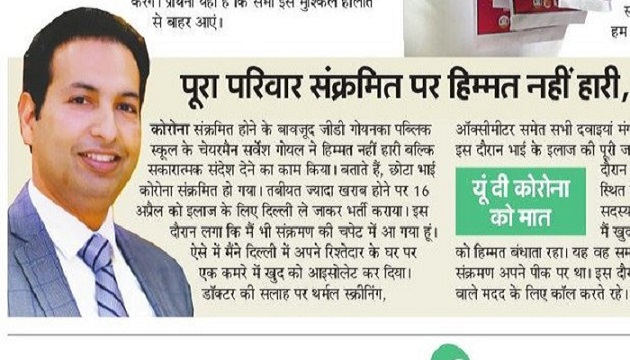 Infected But Did Not Lose Hope

Infected But Did Not Lose Hope:-

The whole family was infected but did not lose hope, kept away and helped others. Despite the corona being infected, Sarvesh Goel, chairman of GD Goenka Public School, did not lose heart but did the work of giving a positive message. It is said that the younger brother Corona got infected. On April 16, after his health deteriorated, he was taken to Delhi for treatment and admitted. During this, I felt that I too had come under the grip of infection. In such a situation, I isolated myself in a room at my relative’s house in Delhi. On the advice of the doctor, all the medicines including thermal screening, oximeter were ordered and started the treatment. During this, he also kept taking complete information about his brother’s treatment.

In the meantime, it was learned that three members, including my two daughters, have also become corona infected in the Lucknow house. Despite getting infected myself, I kept giving courage to everyone. This was the time when the corona infection was at its peak in Lucknow. During this time many acquaintances on my phone kept calling for help. Some needed a bed, some oxygen and all the members of someone’s house got corona infected. As far as possible, while living in isolation from Delhi, I contacted other people and helped the needy. Helped in getting the beds from oxygen. At the same time, in whose house all the members were suffering, they should be provided with medicines and other resources. Gave everyone the courage not to lose heart. Gradually the conditions became favorable. My message to everyone is that do not panic in adverse situations. Taking care of yourself and your family, maintain the courage of the people of the society.