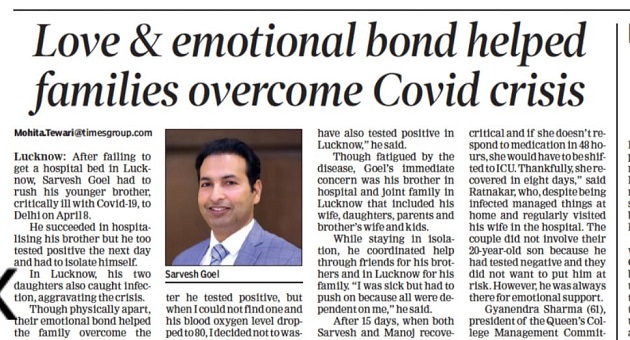 After failing to get a hospital bed in Lucknow, Sarvesh Goel had to rush his younger brother, critically ill with Covid-19, to Delhi on April 8.

He succeeded in hospitalising his brother but he too tested positive the next day and had to isolate himself.

In Lucknow, his two daughters also caught the infection, aggravating the crisis.

Though physically apart, their emotional bond helped the family overcome the challenge.

When hospital beds and oxygen had become prized commodities in mid-April due to the overwhelming surge in coronavirus pandemic, it was the family bond and motivation that made many families like Goel’s display extraordinary willpower survive against all odds. “I desperately searched for a hospital bed for my younger brother, Manoj (42), after he tested positive, but when I could not find one and his blood oxygen level dropped to 80, I decided not to waste time in Lucknow and rushed him to Delhi. With the help of some friends, I got him hospitalised, but I was also diagnosed with Covid-19 the next day,” said Goel, the chairperson of GD Goenka Public School, while recalling the struggle.

Goel had mild symptoms and he took a room on rent in Delhi to isolate himself. “Then came the news that my two daughters and niece have also tested positive in Lucknow,” he said.

Though fatigued by the disease, Goel’s immediate concern was his brother in hospital and joint family in Lucknow that included his wife, daughters, parents, and brother’s wife and kids.

While staying in isolation, he coordinated help through friends for his brothers and in Lucknow for his family. “I was sick but had to push on because all were dependent on me,” he said.

After 15 days, when both Sarvesh and Manoj recovered, they returned to Lucknow to take care of the family.

Alka Ratnakar (45) and her husband Ratnakar Srivastava (49) got infected on April 21. While her husband had mild symptoms, Alka’s oxygen saturation levels dipped to 65%. After trying for hours, she got a bed in Balrampur hospital. “I was scared out of my wits when the doctors told me that she is critical and if she doesn’t respond to medication in 48 hours, she would have to be shifted to ICU. Thankfully, she recovered in eight days,” said Ratnakar, who, despite being infected managed things at home and regularly visited his wife in the hospital. The couple did not involve their 20-year-old son because he had tested negative and they did not want to put him at risk. However, he was always there for emotional support.

Gyanendra Sharma (61), president of the Queen’s College Management Committee, remained hospitalised for 15 days in a high dependency unit after getting infected on March 24. “My daughter Sonal saved my life. She took me to five hospitals in search of a bed, but when we could not get one, Sonal coordinated with my friend RP Mishra, former principal of Queen’s College, and got me admitted to Era’s Lucknow Medical College and Hospital,” he said. 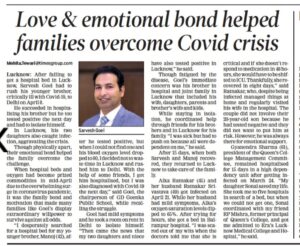