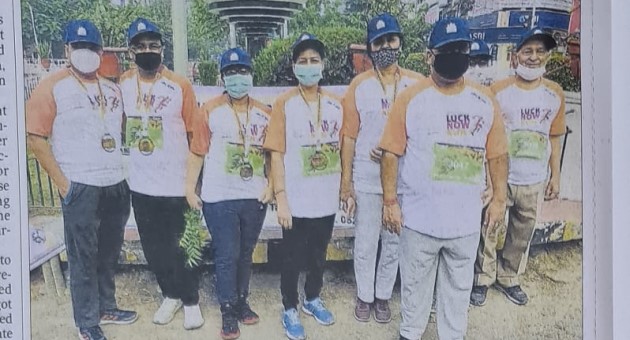 By shivamnigametl@gmail.comNovember 4, 2020October 10th, 2022No Comments

People in large numbers participated in Lucknow Run 2020 organised in 22 cities across India on Sunday. Organised by The centrum, an Urban Lifestyle Club, in Association with Indian Industries Association (IIA), the event was in four categories of 21KM,10KM, 5KM, and 3KM.

Since the event was held Virtually in the wake of covid-19 pandemic. participants had the advantage to complete the run anytime between 6 a.m. to 6 p.m. within the safe premises of their homes, terraces, nearby Grounds of parks.

In Lucknow city, the run took place at Rajajipuram, kukrail picnic spot, Janeshwar Mishr park, and Gomti riverfront in which a large number of citizens took part. Driven by the “Fit India” Initiative, the participants spread the message of Mission Shakti and the importance of respecting women. They also Vowed to beat covid and stay healthy.

While ADG, PAC, Vinod Singh described it as a wonderful experience, IronMan Kishlay Rai said running in the “Lucknow Run” t-shirt was a memorable experience.

Several women also participated in the run and were honored under the Mission Shakti programme launched by Chief Minister Yogi Adityanath in the state last month.

This time due to covid-19, the format of “Lucknow Run” was virtual in which most of the participants ran in their homes and nearby places and took a pledge for a healthy city and a Healthy Nation, “said Sarvesh Goel, managing partner, The Centrum.

He added that thousands of people participate in the event.