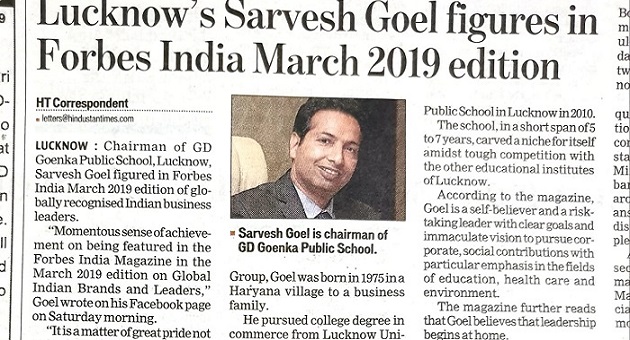 “Momentous sense of achievement on being featured in the Forbes India Magazine in the March 2019 edition on Global Indian Brands and Leaders,” Goel wrote on his Facebook page on Saturday morning.

“It is a matter of great pride not only for me but for all those people who are associated with me. This recognition has now bestowed more responsibility and will inspire me to do well in the future. I have never compromised on ethics and principles and made sure that it impacts the society positively,” Goel said.

The promoter of Mansingh Goel Group, Goel was born in 1975 in a Haryana village to a business family.

He pursued a college degree in commerce from Lucknow University.

He actively takes part in sports, drama, and literary activities. An enthusiastic cyclist, a marathon runner, an environmentalist, Goel is very active on the social circle, according to the magazine.

Goel is credited with establishing the world-class GD Goenka Public School in Lucknow in 2010.

The school, in a short span of 5 to 7 years, carved a niche for itself amidst tough competition with the other educational institutes of Lucknow.

According to the magazine, Goel is a self-believer and a risk-taking leader with clear goals and immaculate vision to pursue corporate, social contributions with particular emphasis in the fields of education, health care, and environment.

The magazine further reads that Goel believes that leadership begins at home.

In 2018 Goel was presented the Champions of Change Award by Vice-President Venkaiah Naidu.

Other business leaders who figured in this edition of the magazine include Ratan Tata, Lord Swraj Paul, Rahul Bajaj, Shiv Nadar, Yadupati Singhania, Kumar Mangalam Birla, Anand Mahindra, and many others. 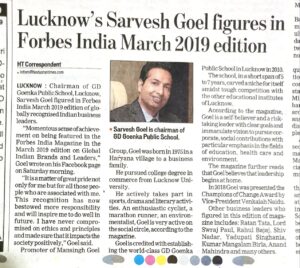